We're open 24/7 and ready to help you during COVID-19 with Sanitization Solutions.

Albuquerque » Blog » Uncategorized » What’s The Difference Between Bacteria and Viruses?

What’s The Difference Between Bacteria and Viruses?

Published by SEO on October 29, 2021 in category: Uncategorized 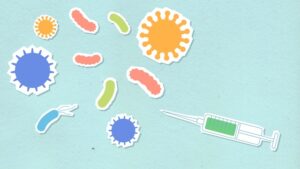 With the COVID-19 pandemic, there have been frequent conversations on natural bacteria and viruses. People have tried to understand the medical theory behind why viruses originate and how different they are compared to common bacteria that different antibiotics and medicine can cure.

There are some major differences between bacteria and viruses, and you should read on so we can tell you all about it.

Bacteria and viruses are generally related to diseases. However, bacteria are good too. There are helpful bacteria in the human body that helps us digest our food and break it down. However, viruses generally cause disease in humans, animals, and even plants.

Bacteria, also called germs, are tiny, microscopic organisms that are not visible to the naked eye. They are everywhere and exist both on the inside and outside of your body. They are simple, single-celled organisms that can survive in extreme conditions.

They have the following components in their cells — a cell wall, cell membrane, a loop of DNA or RNA called nucleoid, flagella, ribosomes, plasmids, and food granules. These components provide bacteria the ability to survive on their own. The flagella help the bacteria move around and allow them to reproduce due to the loop of DNA.

Bacteria can be helpful or harmful. Helpful bacteria help us digest our food in the body. Humans also use bacteria as a model of food production. They are used in the production of yogurt and cheeses via industrial processes.

Viruses are parasites. They are intermediates, which means that they are dead outside the host body but alive inside it. A virus can’t reproduce by itself, but once it finds itself in a host’s body, it will rapidly make many copies of its DNA, causing a viral infection. Unlike bacteria which can be helpful and harmful, viruses are always harmful since they are parasites.

Most viruses either have DNA or RNA as their genetic material. They can infect humans, plants, and animals alike. One of the most common viruses is the common cold that you can contract once or multiple times a year.

What’s the Difference Between Bacteria and Viruses?

According to studies conducted at the University of Queensland, the major difference is a biological one. Bacteria are free-living cells that can live inside or outside the body. However, viruses are a collection of non-living molecules that need a host to survive.

Why is it Important to Know the Difference Between Viral and Bacterial Infections?

If doctors know whether the illness is bacterial or viral, they can treat it accordingly. They won’t use antibiotics unnecessarily and increase your immunity towards such drugs. Thus, doctors want to prevent any side effects resulting from not knowing the nature of the disease.

Are Viral Infections More Dangerous than Bacterial Ones?

The stage of infections helps us identify the level of harm they can do. Generally, viral infections can be more difficult to alleviate. Once they know an infection is bacterial, the doctors will employ antibiotics to rid the patient’s body of the harmful bacteria or stop its reproduction. The uptick in the use of antibiotics has caused bacteria to grow immune to certain antibiotics. However, bacterial infections are still more controllable than viral ones.

In viral infections, if you’re not vaccinated, the body takes a very long time to create a line of defense. There’s no single way to combat viral infection, and it often takes a fair amount of time. The treatment of a viral infection can be a combination of the following:

There are many differences between viruses and bacteria. But perhaps the most important one is that viral infections take more time and effort to treat. We must take vaccinations for all of the viruses we may encounter as this is the best way to prepare our immune system against viruses. Bacterial infections are also a nuisance. However, due to the biological differences between viruses and bacteria, they are relatively easy to handle.

If you’re looking for more information regarding the differences between viral infections or bacterial ones, please reach out to us on our website.